2019 has seen me writing ‘Out of this World’ for the Little Angel Theatre, storytelling at Worthing Storytellers, telling salty seaweedy stories at the Algaenarium and currently creating ‘Tales Around the Tree’ for the Dome, Brighton, performances on 18th, 19th and 20th December. 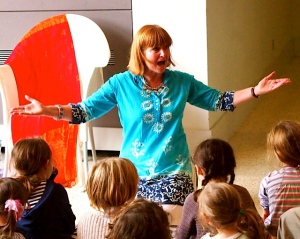 Stories have always been an important part of my life, and I still have the collections of folk tales and fairy stories I was given as child on my book shelves today.

After moving to London and studying Drama I worked with a wide variety of community, fringe and children’s theatre companies, touring both nationally and internationally. For sixteen years I worked with Kazzum Arts Project as a performer, writer, director, and workshop facilitator; and for five of those years I was also Joint Artistic Director of the company.

Eventually after twenty years in London the tug of the sea became too strong to resist, so I moved to Brighton and took a three month sabbatical from work. I spent those three magical months immersing myself in stories at the International School of Storytelling,  before training as an integrative arts psychotherapist.

As well as telling, listening to and writing stories, I now work as a therapist, supervisor and families outreach officer.

I set up Roots to Riches in order to explore storytelling in all its forms, offering performances, workshops and tailor made tellings for specific events. I have performed in a wide variety of places from The Cambridge Folk Festival and Wakehurst Place to Waterstone’s bookshop and Hastings Castle, as well as at numerous schools and other venues. I have also been storyteller-in-residence at Brighton Museum and Fabrica Gallery. 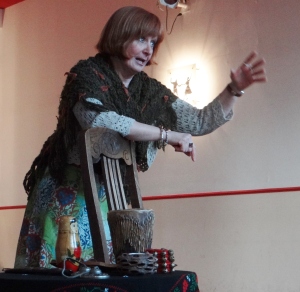