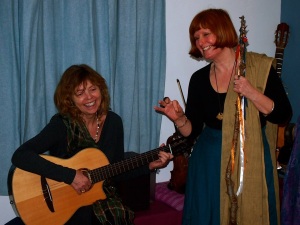 Musician Annie Sheppard and I started working together in 2013.  Our first Collaboration was ‘Svetlana and the Stone Shoes’, which was inspired by a folk tale from Georgia.  This was performed at the Iron Duke in Hove and at the Royal Star and Garter in Surbiton.

Here is a clip from a rehearsal of ‘Svetlana and the Stone Shoes’…..

We were then commissioned to create a series of shorter, environmentally themed, stories that were performed throughout a Shamanic Camp in Dorset as part of the ritual and ceremony of the weekend.

Some of these stories were also performed at a charity event in Worthing.

‘Dark Beira’, was a piece that we created by weaving together snippets and fragments of stories about the Scottish Goddess of Winter into one hour-long performance of storytelling and music.  This piece was performed at the Open House in Brighton in November 2014.

Our last collaboration was ‘The Kingdom of the Sea’, a story of a woman who finds herself lost and alone in a hut surrounded by driftwood. The story of a man’s quest to find the ocean that lies at the very edge of the world. A story of love, loss and what lies hidden at the bottom of the sea. It was performed in 2017 and 2018.

For more about Annie please check out her website http://www.musicsongstory.com